Straight from my video lessons, it took me less than 5-minutes to find PEIX and trade PEIX Monday. As a result of this knowledge, I paid myself 25% or $7,814.68 profit after holding the stock for 1 hour and 3 minutes.

This really was a cupcake given President Trump’s ethanol announcement Tuesday and a good example of my swing trading strategy at work. Here’s a snapshot of the steps I took to find and trade PEIX.

While reviewing my EquityFeed scan, which tracks stocks under $10 with at least $1 million in dollar volume, I noticed 2 ethanol stocks I’m familiar with, PEIX and GEVO, in the top % gainers Monday morning. Here’s the same scan, showing Tuesday’s top % gainers or gaps since it’s currently 6:04 a.m. ET.

When more than 1 stock in a sector (PEIX, GEVO = ethanol / energy) is in the top % gainers, there’s often sector news in play, so I quickly checked Twitter to see what traders were talking about on PEIX. Within seconds I found the news Trump was expected to unveil a plan allowing more ethanol in gas Tuesday.

At this point it became a question of which stock to buy. PEIX was up more than GEVO at the time, about 20% versus 10% respectively, so I opted to go with the stronger of the two stocks at the time, Pacific Ethanol. Now all I needed to do was look for the safest entry, since I was definitely late to the move. 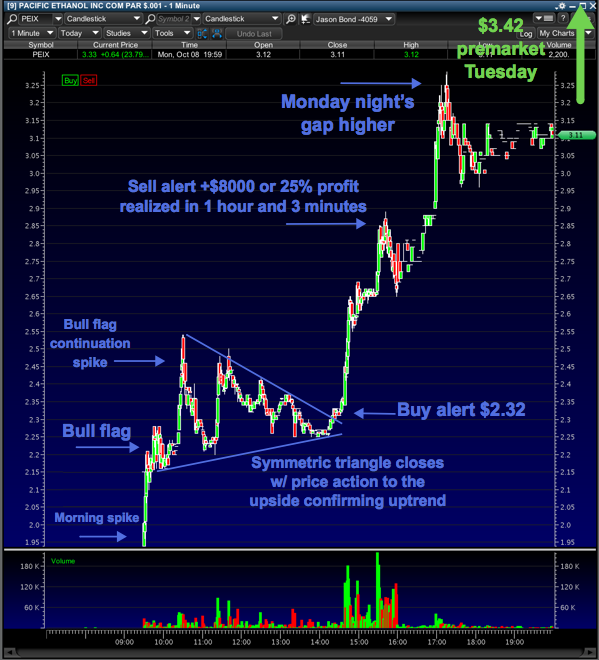 Notice how I waited all day and bought right off the symmetrical triangle demand line after the geometric shape (continuation chart pattern) closed at the hypotenuse? Doing so afforded me a tight stop loss in the $2.20’s or about $.10 downside and big upside range to the upper $2’s if it worked or $.60 upside, which was in fact what I captured exiting at $2.89.

What’s so exciting is that this will likely happen, in another sector Tuesday, whether it be bitcoin penny stocks, weed penny stocks or some other hot sector, I’m always hunting for momentum like this and it’s precisely why I’ve made $72,000 in realized gains across the last 2-months trading no more than 5-minutes a day.