About a month ago, I launched a new service — Jackpot Trades — and one of my highest conviction trade ideas had a massive move (+46%) to kick off the New Year, just as I suspected. The play was in Energous Corp. (WATT), and there were a few things going for the stock.

When I look for my Jackpot Trade, I find a catalyst that could move the stock, as well as areas of value (where I’m looking to buy the stock).

The thesis in WATT was the “January Effect”.

Basically, when stocks get beaten down all year, when the New Year starts — they tend to catch a bounce and run higher… and I’m going to walk you through exactly how I spotted this play.

How I Spotted A Massive Winner In WATT

When I find my highest conviction trade idea, I make sure to provide my clients with my detailed analysis, as well as a trade plan.

Here’s what I sent out to my clients when I spotted the play in WATT.

We can all agree the chart is horrible and in the last year there’s been very little to be excited about. But as a trader all that matters is what might be coming next, here’s something from the recent earnings conference that’s notable.

“We believe the signs of this began even before Apple’s cancellation of their Chi-based AirPower charging mat. As we’ve noted in past calls, we are seeing strong interest for our RF-based technology as an upgrade and replacement for first-generation coil charging technology.”

This is a good catalyst coming into view as the stock lingers in oversold. Historically oversold was generally a great time to buy WATT, it’d bounce big, but in 2019 that’s just not been the case.

Now I would write this off any other time of year, however, as a January effect play, I could see this getting frisky if it holds the $2 level headed into the new year.

This is a story stock meaning they are often mentioned, speculatively, in articles, with much larger companies like Apple seen above, which can often be a driver for the stock depending on the moves of the larger companies, like seen above.

So there were multiple catalysts in play for WATT, and the next step was to look to the charts and find an area of value. 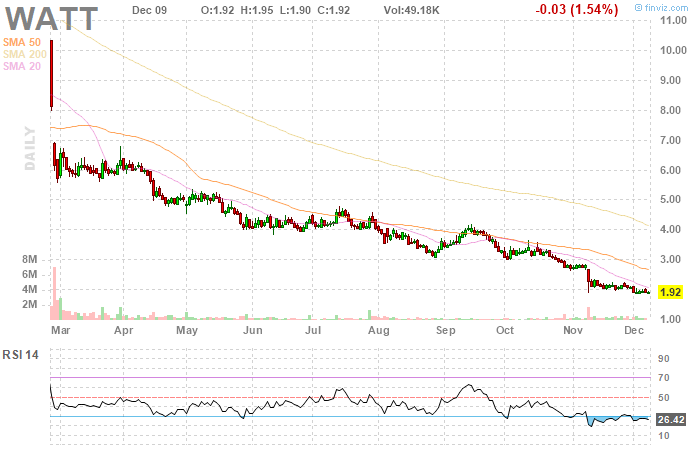 When you look at the daily chart in WATT above, you’ll notice it was stuck in a downtrend pretty much all year. However, to end 2019, WATT found a key support level right around $1.80. That meant this was an area to keep an eye on.

Not only that, but when you look at the Relative Strength Index (RSI), it’s been below 30 for about a month. That signaled the stock was oversold, and typically, that’s an indication it may be a good time to buy it.

Companies that are beaten down and have positive catalysts could attract buyers who want to own the stock on the cheap. In turn, if the demand picked up, WATT could have a massive run.

So there was limited downside with massive upside potential, which was why I liked WATT as a Jackpot Trade.

Remember, this was the area I was looking to get into WATT, but that doesn’t mean you necessarily need to follow suit. In fact, you could make the trade your own. For example, maybe you wanted to buy the stock around $1.85 and stop out below $1.75.

Now, when I looked to the charts at a closer glance, the $1.80s looked like it was holding… and that meant the stock may have been prime to bounce. 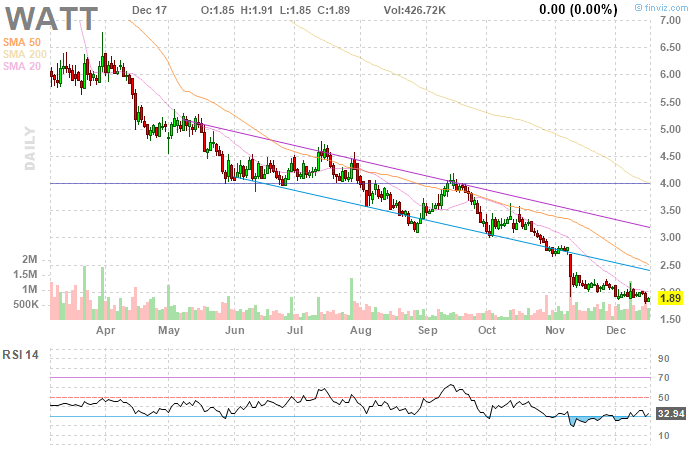 Here’s how you could’ve played it.

You could’ve set a buy limit order anywhere in the $1.80s. 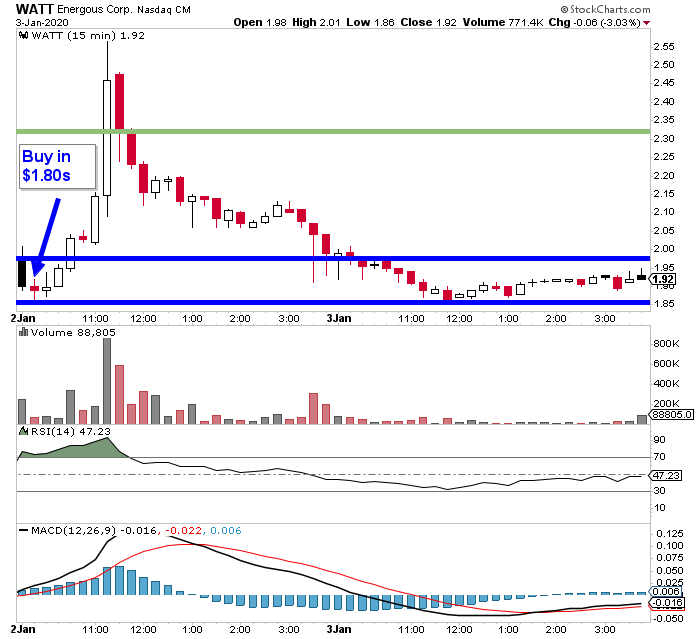 More specifically, you could’ve placed an order to buy shares of WATT at $1.85. If you look at the chart above, that very same day, you could’ve sold shares for $2.58 — and that would’ve been good for a whopping +40% winner.

If you missed out on this trade, sorry to hear. However, it’s the start to a New Year andmy first Jackpot Trade of 2020 drops on Monday.If you want to wake up on Monday morning to my favorite trade idea in your inbox, then click here to join now.

“Trading shouldn’t be hard. Let me do the heavy lifting, pull back the curtains, and send you my top idea every single week. Others are already cashing in!”